For those of you lucky enough to be in Edinburgh on the shortest night of the year, you really should investigate this interesting event that is part of the 66th Edinburgh International Film Festival. Those Scots sure love their festivals, and this young collective seems to know how to have a film festival event that’s both intellectual and fun.

Here’s the press release; sorry if I got envy all over it. 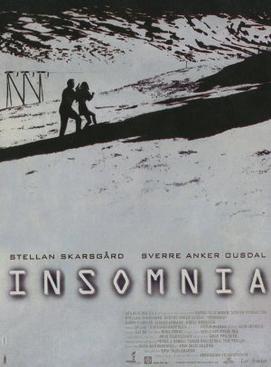 Midnight Sun featuring Insomnia is a special event which celebrates Nordic and Scottish crime in its dialogue between Scotland and Scandinavia, as well as literature and film. Developed as an applied Master’s thesis project by Peek Cinema, a team from the award-winning MSc Film in the Public Space programme at the University of Edinburgh, Midnight Sun is a rare event which sees the Edinburgh International Film Festival collaborate with post-graduate students in the programming of their 66th festival.

On Thursday 21st June Midnight Sun will take full advantage of the summer solstice in order to delve deeper into the contemporary fascination with Nordic noir within a Scottish context. Proceedings begin with a drinks reception at the Point Hotel’s Sky Bar at 8pm, where guests will be able to enjoy drinks and complimentary Scandinavian canapés surrounded by the panoramic views of Edinburgh’s own monumental skyline. The event will be introduced by Scottish crime writer Lin Anderson, who will whet the audience’s appetite for a screening of moody Norwegian noir Insomnia by addressing the theme of landscape and the use of light and dark in crime fiction, as well as drawing comparisons and contrasts between Scottish and Scandinavian traditions, in addition to discussing the relationship between noir film and literature.

As the sun slowly sets in the Sky Bar, the audience will cross Lothian Road to the Filmhouse for a screening of Erik Skjoldbjærg’s 1997 feature Insomnia at 10.25pm. Overturning the typical darkness characteristic of noir genres, Insomnia moves away from the traditional association of Scandinavian crime fiction with short days and minimal light, using instead the sun-drenched summer nights near the Arctic Circle as the backdrop for its detective story. Stellan Skarsgård stars as Jonas Engström, a Swedish police detective sent to a remote Norwegian village to investigate the murder of a young woman. As the investigation progresses, the lines between perpetrator and victim become blurred, raising difficult questions about human nature and the capacity for evil. With the incessant midnight sun afflicting its protagonist, Insomnia illustrates the centrality of landscape to noir narratives, portraying environment almost as a character in and of itself.

Lin Anderson is one of Scotland’s leading crime writers and an active screenwriter, whose new addition to her popular Rhona MacLeod series, Picture Her Dead, comes out in paperback on the day of the event. Copies of the book will also be available to purchase and have signed on the night.

Peek Cinema:
Comprising Cosima Amelang, Parissima Darabiha, Emma Fyvie, Maija Hietala and Susanne Scherer, the Edinburgh-based collective met whilst studying on the award-winning MSc Film in the Public Space course at the University of Edinburgh under the tutelage of Susan Kemp and Jane Sillars. Hailing from the US, France, Scotland, Finland and Germany respectively, the group’s ethos to create new and exciting modes of film exhibition is born from a broad and eclectic range of individual experiences in the arts industry.

Official Website: www.peekcinema.com
Facebook Page: www.facebook.com/PeekCinema
Facebook Event: https://www.facebook.com/events/214286075359644/
====
If you’re wondering whether this is going actually be as entertaining as it sounds, here’s a bit of evidence from an event the group organized previously, and there are more bits on their website . . .

… but I’m going to post this and go sulk because I won’t be there. (But a word to the wise – if you haven’t seen the original Insomnia, you really should, even if you watch it from your living room couch.)

One thought on “Sleepless in Scotland”