The team of detectives who first came together in Unwanted – led by Alex Recht and including the civilian researcher Fredrika Bergman and the crude but talented police officer Peder Rydh – have a handful of cases on their plates. A man, run down in the street, needs identification; a vicar appears to have shot his wife before killing himself, following the news that one of their daughters has died of a drug overdose. Their other daughter can’t be located for them to break the tragic news. Though the investigators don’t know about it, readers have witnessed yet another crime, one from the past, a rape that occurs in the opening pages. The Gradually, very gradually, the threads between these cases are drawn together by readers and the hardworking team.

The lives of the chief characters also play a role as the story unfolds. Fredrika is heavily pregnant, not feeling well, and regretting the loss of the comfortable life she’d had, including lots of energy for work and a satisfying if unconventional long-term relationship with an older married man. Peder, whose marriage has failed, gets into trouble by making sexist remarks (without really understanding why others find his humor so unacceptable). He also can’t help feeling aggressively competitive with a new member of the team, a humorless and upright cop named Joar. Alex is wondering why his beloved wife has become so distant lately.

Added to these story lines, readers follow the fates of two other characters, one an undocumented immigrant from Iraq who finds out that the new, cheaper route to Europe carries a much higher price than he anticipated, as the family he hopes to bring to Sweden for a better life has no idea what has become of him. The other, a particularly gripping part of the novel, concerns a Swedish woman who is undertaking a secretive mission in Thailand. She finds her identity, bit by bit, is being erased, with her return flight canceled, her email account locked, her phone calls home unanswered, feeling a growing sense of menace as everything that identifies her and connects her to her past vanishes.

Though the story involves immigration – the vicar was an activist on immigrants’ behalf, and clearly his activities providing shelter to undocumented travelers is somehow 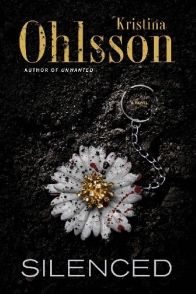 connected to his death – the author uses social issues as a backdrop rather than as a focus. The experience of being silenced is thematic, particularly in the case of the woman trapped in Thailand and the immigrant who finds himself in over his head, but the social issue is much less front and center than in some politically-conscious crime fiction from Sweden. Ultimately the complex (perhaps overly-elaborate) plot is about human relationships that are shaped by the usual human motives: greed, jealousy, or hope for a better life for one’s family. It’s a long book at over 400 pages, but quite an entertaining read.

The US edition will not be out until March, 2013. I must say, this is one of those rare occasions when I much prefer the US cover to the UK one.