The recent issue of the extremely useful review website, Reviewing the Evidence, Includes a review of the third of Arne Dahl’s Intercrime series to be published in English translation. Thanks to RTE’s generous policies for reviewers, I can reprint it here. And thanks to the author, who donated a copy of the book to my library when he visited last spring.

Arne Dahl has likened the publication of his mysteries in English translation as a kind of time travel. He published his ten-volume Intercrime series in Sweden between 1998 and 2007. The third volume in the series is finally out in the UK, fourteen years after its original publication. Fortunately, readers will find it hasn’t gathered any dust in the meantime.

The A Team, a team created to investigate particularly complex crimes, was brought together in MISTERIOSO and disbanded at the end of BAD BLOOD. As TO THE TOP OF THE MOUNTAIN 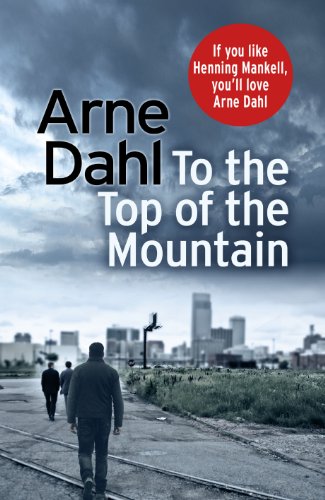 opens, familiar characters have been scattered to new assignments. Paul Hjelm and Kerstin Holm are investigating a stupid and all-too-predictable incident involving rival sports teams, too much beer, and a moment of rage-fueled violence. Arto Söderstadt is investigating an explosion in a high-security prison with Viggo Norlander, who is more occupied with his infant daughter, having become a father unexpectedly late in life. Jorge Chavez has hit the books and has become the most qualified policeman in Sweden to not get a promotion. Gunnar Nyberg has the most difficult assignment of them all: investigating child pornography rings. Their former leader, Jan-Olov Hultin, is pushing a lawnmower like Sisyphus, having been put out to pasture.

But when five men are slaughtered in an isolated industrial estate, three from an East European drug empire and two members of a rising neo-Nazi group, the team is brought back together to sort out what happened. The crime scene suggests a third party might have been involved, escaping with a briefcase that had been chained to one of the victim’s wrists, and an exotic explosive used at the scene matches that used in the prison. Clearly, there’s more here than meets the eye.

That is more or less the theme of the book. A simple bar fight turns out to be far more complicated. The pornography investigation unexpectedly offers a glimpse into unrelated crimes. Things that seem trivial hold layers within layers, and it’s only the intuition and the stubborn curiosity of the reassembled A Team that can tease out the meaning behind run-of-the-mill violence. Just as you think you’ve come to last layer of the onion, you discover something even more deeply hidden.

Every Swedish crime writer traces his or her lineage to Maj Sjowäl and Per Wahlöö’s ground-breaking Martin Beck series that the co-authors called “the story of a crime” – the broken promise of an equal and democratic society. Though the pair have many heirs, few writers are actually similar in style. Arne Dahl’s ten-book project with a similar collective protagonist mixes dry humor, irony, and seriousness as he uses criminal violence to illuminate the international complexities of modern-day Sweden. This isn’t to say his work is derivative. Rather, it’s awfully good as it provides a similar diagram of a crime that has gone global.