I wrote this review for Reviewing the Evidence some time ago and then forgot to repost it here, so here you go. More on the way . . .

Iceland is a small and peaceful country where murders are infrequent and the Reykjavik Instagram account is full of photos of police officers holding puppies or eating ice cream. But some years ago Arnaldur Indriðason put it on the crime fiction map when his third mystery, JAR CITY, became an international phenomenon. Since then, his novels featuring the dour detective Erlendur Sviensson have gained a loyal worldwide following. The protagonists of his two most recently translated novels were Erlendur’s colleagues Elinborg and Sigurdur Oli, who were holding the fort as their boss conducted personal business in the east. Erlendur resumes center stage in this novel as we finally discover what he has been up to.

Throughout the series, readers have learned two things about the laconic inspector: he finds 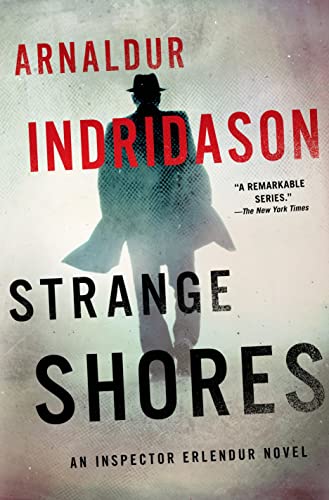 modern-day Reykjavik a foreign and uncomfortable place and he is dogged by survivor’s guilt because, when he was ten years old, he and his younger brother were caught in a blizzard. Erlendur barely survived, but his brother was never found. His lingering sense of guilt has shaped his character and from time to time he has returned to the rural landscape of his youth in eastern Iceland where he sleeps in the ruins of his family home and wanders the hillsides.

This time, even the east is changing. A giant aluminum smelter and a hydroelectric dam are altering the landscape and crowding the fjord with freighters. Some of the residents are pleased with the changes, but many old-timers, like a hunter who Erlendur meets early in the story, share the inspector’s opinion. “He couldn’t understand how on earth an unaccountable multinational, based far away in America, had been permitted to put its heavy industrial stamp on a tranquil fjord and tract of untouched wilderness here in the remote east of Iceland.” The hunter, it turns out, was involved in the search for Erlendur and his brother many years ago. Now he’s tracking a fox that has been worrying sheep. When he mentions that foxes conceal all manner of things in their earths, Erlendur wonders if he might find some relic of his brother, missing all these years.

Descending from the moors, he asks the hunter about a case that he’d read about, a woman who disappeared in another storm, her body never found. Erlendur’s mother knew Matthildur casually, and he’d always wondered about the case. He begins to ask the elderly residents about it, people whose stories will soon be lost forever like the landscape he grew up in, and gradually he pieces together what happened to her. It’s not a police investigation. It’s a long-term interest in the fates of people confronting the wilderness – and the cruelty of others, which is as old as the hills.

The narrative structure of this novel is similar to other books in the series, particularly SILENCE OF THE GRAVE, in which two stories unfold. It’s not clear who is involved in one of them, whether they are chronologically synced up, or how exactly the stories are related until, toward the end, the two narratives click together. In its quiet, thoughtful, and understated way, this novel explores the tragedy of unfinished stories and the fact that even when a mystery is solved, it leaves many fundamental questions unanswered.

Readers of the series will be pleased to learn that another volume in the series, a prequel set in the 1970s, has been published in Iceland. Let’s hope it will be translated into English before too long.

2 thoughts on “Strange Shores by Arnaldur Indriðason – a review”