I should probably put a caveat somewhere on this blog: I’m not fond of thrillers (except when I am). So take that into account when I write a grumpy review. You’ve been warned. This review came out at Reviewing the Evidence and is reposted here with permission.

If you enjoy a good thriller featuring ancient coded messages and secretive international organizations and you don’t mind taking off your disbelief suspenders while you relax with a big fat adventure story, this Swedish doorstopper may be for you. If your eyes have a tendency to roll while reading, your ophthalmologist may advise against it.

The high concept thriller from Sweden involves two people searching for their missing partners. In one case, a reporter is convinced her depressive ex-husband, a brilliant cryptographer, hasn’t found a quiet place to commit suicide, as the police surmise. In another a brilliant young scholar’s fiancé is trying to get over her abrupt disappearance. The story cuts between their attempts to figure out what’s going on and the experiences of the two people who have been scooped up by a secret international government organization that has been trying for years to crack an ancient code that predicts the imminent end of the world. 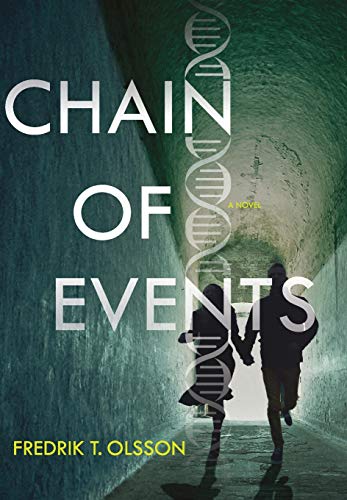 It seems the ancients were somehow aware that our entire history is laid out in our DNA. Since their warnings are in cuneiform and in code, they need both a scholar of ancient languages and a cryptographer to decipher them. But those two have far more to decipher: what is this organization? What do they already know? What are they hiding? Is it already too late to crack the code? The answer to that last question grows pressing as a deadly and extremely contagious plague breaks out and rapidly spreads throughout Europe.

The good news is that Fredrik Olsson is a screenwriter and knows his way around disaster movies, conspiracy thrillers, action scenes, and dystopian environmental horror stories. It’s a gripping read with interesting characters – so long as you don’t pause to think.

The bad news is that his skilled storytelling is wasted on a preposterous tale about a totally secret organization located in the heart of Europe that has been trying to decode ancient riddles for decades but apparently has to kidnap people to get good help. We’re asked to believe that somehow the future of the species is written in secret code in our DNA, which was unraveled millennia before Watson and Crick. And it takes advantage of our desire to be afraid. Very afraid.

This book’s release happened to coincide with an Ebola outbreak that fired up Western anxiety about contagion, which makes the gleefully gruesome descriptions of a horrible and fast-spreading hemorrhagic plague either timely or tasteless, depending on your tolerance for fear-driven narratives and gore.

In the end, there is something of a philosophical moral to the story that is somewhat redemptive, but it takes an awful lot of special effects and explosions to get there.