Here’s another review reposted from the long-running review site, Reviewing the Evidence, a good place to find over 10,000 reviews of books that in some cases might otherwise get overlooked. Thanks to them for allowing me to repost this one here.

SOMEONE TO WATCH OVER ME
by Yrsa Sigurdardóttir and Philip Roughton, trans.
Minotaur Books, February 2015
328 pages
$25.99

For such a small country, Iceland has an unusually high rate of crime – though only in fiction. In the fifth book featuring lawyer Thóra Gudmundsdóttor, quite a lot is going on. A young man with Down Syndrome is locked up in an institution for 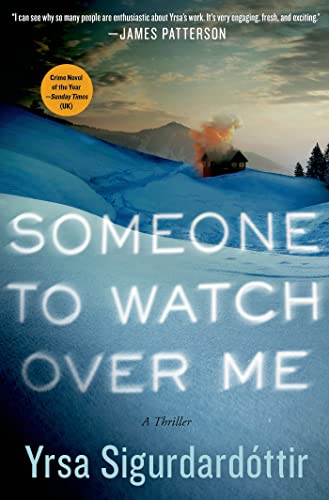 the criminally insane after being convicted of setting fire to his assisted living home, killing five people. His mother is convinced he couldn’t have done it. So is a creepy and deeply disturbed man named Jósteinn, who hires Thóra to reopen the investigation for reasons she doesn’t entirely trust. But times are dire after the great financial crash and Thóra reluctantly takes the case.

But that’s not all! A young mother living at home with a toddler believes her house is haunted. A radio talk-show host is getting strange threatening calls on-air, a hit-and-run incident that killed a young girl has gone unsolved, and one of the survivors of the arson attack has experienced a trauma she can’t explain because she suffers from locked-in syndrome. Add to that, Thóra’s home life has grown complicated when her parents are forced to move in (to a house already crowded with her two children, her son’s girlfriend, and an unexpected grandchild). Her pleasant but unemployed German boyfriend Matthew might grow weary of life in post-crash Iceland and decide to return home.

There’s more than enough plot in this story and, while the author does a good job drawing memorable characters, there are a lot of them to keep track of. Bit by bit, Thóra gathers together the pieces of an extremely complicated puzzle. The author, fond of ghost stories (and her standalone novel, I REMEMBER YOU, is an excellent one) adds a bit more than a touch of the supernatural to this tale, but most of the plot revolves around the motivations of the assisted-living home staff, the experiences of the residents and their families, and Thóra’s growing conviction that her Down Syndrome client is truly innocent, all with the economic ruin of the small nation as backdrop.

Though the author throws too many puzzle pieces on the table, patient readers who enjoy a complex plot may well enjoy helping an appealing protagonist work through them, connecting bits together, looking for the piece that will fill that oddly-shaped hole, watching the whole picture emerge.