QUICKSAND by Malin Persson Giolito, translated from the Swedish by Rachel Willson-Broyles, is this year’s Petrona Award winner. Congrats to both author and translator! 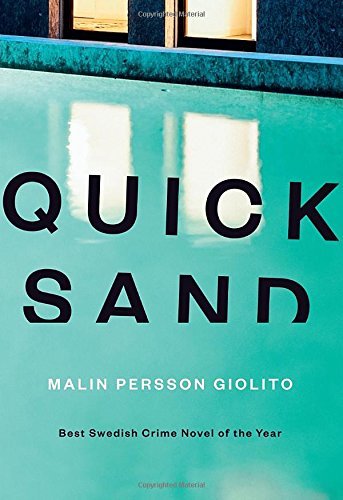 Of course, these don’t happen with anything like the US frequency in other countries, so the dynamics are different and the focus here is on the backstory – what would lead a privileged girl to become involved in committing violence and what kind of relationships might become warped in the upper reaches of Swedish society and the tightly-wound world of adolescence? Here’s what the judges – all of them well-read and passionate about the genre – had to say about their choice.

In a strong year for entries to the Petrona Award, the judges were impressed by Quicksand’s nuanced approach to the subject of school shootings and the motives behind them. Persson Giolito refuses to fall back on cliché, expertly drawing readers into the teenage world of Maja Norberg, who faces trial for her involvement in the killings of a teacher and fellow classmates. The court scenes, often tricky to make both realistic and compelling, are deftly written, inviting readers to consider not just the truth of Maja’s role, but the influence of class, parenting and misplaced loyalty in shaping the tragedy. Rachel Willson-Broyles’s excellent translation perfectly captures Maja’s voice – by turns vulnerable and defiant – as she struggles to deal with events. Gripping and thought-provoking, Quicksand is an outstanding Scandinavian crime novel and the highly worthy winner of the 2018 Petrona Award.

I admit I found it a challenging book to read, but the voice of the narrator – a naive, irritating, obnoxious, and troubled child whose decisions have landed her on trial for murder – was well-rendered. I can only imagine it was a challenge to translate, keeping that voice as conflicted and immature as it is. If ever a reader thought Sweden is a democratic socialist paradise of equality and healthy relationships, this is quite the antidote.