Will you be anywhere near Minneapolis on June 1st? Then you should head over to Once Upon a Crime at 7pm where Jussi Adler-Olsen will be making a rare appearance and signing his third Department Q book to be translated into English (titled A Conspiracy of Faith on this side of the pond and Redemption in the UK. The Danish title, which means 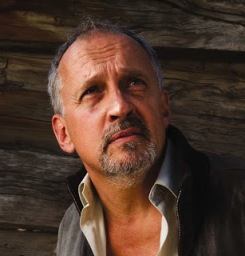 Message in a Bottle, is better, but unfortunately a lesser author with a big reputation has already used it.)  Once Upon a Crime is always worth a visit, whatever the date is. This is a special gig for a special store – Alder-Olsen will only be appearing at four bookstores on this tour. I’m so happy my local is one of them.

I hope to have a review of A Conspiracy of Faith posted here soon. I enjoyed it very much for the same reasons I enjoyed The Keeper of Lost Causes.

Karen Meek has compiled a terrific list of books that will be eligible for the next Petrona award. Lots to look forward to. I’m particularly happy to see another Gunnar Staalesen novel translated, as well as another book by Jorn Lier Horst (an author Maxine particularly enjoyed, as I recall). And there are some new-to-me authors as well.

At the sibling blog, Petrona Remembered, I run through Asa Larsson’s series, culminating in my favorite of her books, Until Thy Wrath Be Past. Norm reprises his review of Red Wolf by Liza Marklund and compares Marklund’s heroine and the Girl of the Millennium Trilogy.

At Crime Scraps, Norm reviews Liza Marklund’s latest novel, Lifetime, and finds it an exciting read with a very human woman protagonist (who he wishes had better taste in men).

Sarah also reviews the novel at Crime Pieces, and loved both the storyline, the diversions into the newsroom where Annika works and its troubles, as well as further developments in the reporter’s complicated home life, writing “ultimately Annika is the reason, I suspect, a lot of people read Marklund’s books and I think she fast becoming one of my favourite characters in crime fiction.”

Whereas I find her chaotic home life a bit exasperating, and say in my review at Reviewing the Evidence, “in the end, the prickly, emotional, and vulnerable Annika takes a back seat to her identity as a confident and professional journalist. Similarly, the novel is at its best when the mystery nudges the personal drama into the background and takes center stage.” Which is a much more measured way of saying that I just want to smack her.

Charles Finch at USA Today does not roll out the welcome mat for Jo Nebo’s The Redeemer, finally hitting shelves in the US. He calls it both plodding and interminable, and confesses right up front, “I can’t stand Nesbø’s books. That includes The Redeemer, which, like his earlier novels, strikes me as pat, lurid and, above all dull, moving at a fatally sedate pace.” He acknowledges that his opinion is not shared by all. (That includes me. He thinks The Snowman is the best, and I thought it the least imaginative and interesting. I liked The Redeemer much better. Also, why would you assign a review to someone who doesn’t like an author’s work? It’s a mystery.)

Glenn Harper at International Crime Fiction reviews Mons Kallentoft’s Summertime Death, which he finds rather annoying for a variety of reasons, including the irrationally dreadful behavior of the police (which is less convincing and interesting as another book in which the police behave rather appallingly, Lief G. W. Persson’s Linda, as in the Linda Murder.) He has also had enough, already, of those loquacious dead people.

For contrast, see his previous review of Linda, as in the Linda Murder, which focuses on the most appallingly awful of his detectives, Ewart Bäckström, who takes very little interest in the

crime he’s investigating, though other detectives nudge the case forward. He advises,

One of Bäckström’s spectacular failings is his attitude toward women, sometimes kept to himself and sometimes revealed openly. If you find his attitude more annoying than comic, trust me–you should stick with the book. Increasingly through the last third of the novel and with considerable impact at the very end, the author brings the story and Bäckström’s sexism (and not only his sexism) into stark focus.

In the end, the book is long, non-linear, a bit demanding, but extremely rewarding. i may have to give Persson another chance.

Jose Ignacio Escribano reviews Hakan Nesser’s Borkmann’s Point at The Game’s Afoot. Esta entrada es bilingüe, which I believe means “Jose Ignacio is far cleverer than I am.” He enjoyed it a great deal and recommends the entire series, particularly for its dialogue.

Ms. Wordopolis reads Anne Holt’s Blessed are Those Who Thirst, The story is a high-energy look at both the affect of a rape on the victim and police work in a time of austerity, when the system is swamped and angry citizens are tempted to take things into their own hands. She writes, “sometimes in the course of a police procedural I lose sight of the crime at the center of the novel and become more wrapped up in the chase for the perpetrator, but that didn’t happen while I read this novel.” She adds that Holt did a great job of portraying the work of civil servants in a realistic way.

Though the author, Quentin Bates, no longer lives in Iceland, he does a great job of creating the sort of woman who might actually investigate crimes there, a down-to-earth mother and soon-to-be grandmother who, quoth the Raven, is “defined by her professionalism and absolute determination to get to the heart of the investigation, but carries an aura of calmness and self-deprecation which instils confidence in her colleagues and victims alike.” She finds the balance of police procedural, personal life, humor and seriousness to be just right.

Sarah at Crimepieces points out that Gaute Heivoll’s Before I Burn is about a crime, but isn’t crime fiction. It’s the fictional memoir of a Norwegian whose village was torched by an arsonist. In adulthood, he moves to Oslo, but is drawn home when his father is taken ill. She says it’s beautifully written and thought-provoking. Just don’t expect it to be shelved in the crime fiction section.

Col adds Camilla Lackberg’s The Stranger (apa The Gallows Bird) to his criminal library at the urging of his wife, who liked it quite a bit more than he did. He found some of the characters cliched and (like me!) dislikes hooks inserted at the end, lures for the next book. I particularly like the way he concluded his review: “my 2012 edition states that the author was the 9th best-selling author in Europe in the previous year. She must have a very big family, I reckon.”

At Euro Crime, Susan White reviews a new book by Anders Roslund and Borge Hellstrom, Two Soldiers, which portrays the rise of youth gangs and how membership in the gang family distorts young lives. It sounds quite as harrowing as their previous work.

Previously at Euro Crime, Raven Crime (aka JF) reviewed The Weeping Girl by Hakan Nesser, Though it continues the van Veeteren series, he steps aside and lets Ewa Moreno take the lead, which she does without missing a step. Great characters, just the right amount of humor, and an involving case make it a book worth reading.