The subtitle of this novel is “a ghost story,” and so it is. I can’t remember when I last read a novel that was so whole-heartedly about ghosts. Some books have a touch here and there of the supernatural – but this is flat-out a suspenseful horror tale with a touch of mystery. And it’s quite a lot of fun.

There are two major threads to the novel. In one, a group of ill-prepared citified Icelanders have decided to renovate an abandoned house in Hesteyri, a remote fishing village in the northwestern fjords of Iceland that is no longer inhabited except for occasional summer vacationers. They hope to make a go of it, hosting paying summer guests, but the three friends, a married couple and an urbane woman friend, have few skills and little money. After a boat captain leaves them there with supplies, promising to return in a week, they begin to realize how unprepared they are. The house is 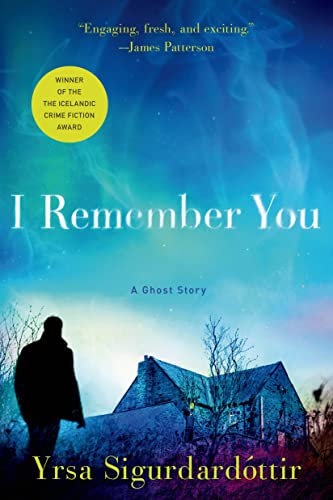 in much worse repair than they thought, the cold and the winter darkness is oppressive, and soon they realize they aren’t alone on the island. A strange, ragged child seems bent on destroying their dreams of turning the vacant house into a liveable holiday home.

Meanwhile, in the remote port of Ísaforþur, the closest town, a psychiatrist is treating a troubled old woman in a nursing home while trying to forget the fact that he lost his young son, something that drove a wedge between him and his wife (who can’t put it behind her). “Lost” isn’t a euphamism. The child disappeared without a trace, and the police can only surmise that he somehow wandered down to the sea and was drowned, his body never recovered. There is also the strange case of vandalism in a school which seems strangely like an incident decades ago.

These things, of course, are hardly random. The malevolent spirit haunting the abandoned fishing village must surely have some connection to the doctor’s missing boy, and photos defaced at the school seem strangely connected to a string of deaths . . .

A great pleasure of this story is the drawing together of these threads as the author gives us a glimpse here, a hint there of how pieces of the story connect – all with a background of impending dread. Things at the remote abandoned village go from very bad to even worse, and the pyschiatrist begins to wonder if he’s losing his mind.

I have never been a fan of ghost stories and am postiively allergic to horror as a genre, but I was surprised at how thoroughly I enjoyed reading this book, though it wasn’t always the right material to read in bed before drifting off to sleep. There are touches of humor here and there, well-drawn and sympathetic characters as well as some who are not, and a plot that keeps winding tighter and tighter. While these kinds of books are often thinly-disguised as morality tales – someone who has chosen to be evil or made a bad choice gets his or her comeuppance – the story behind the haunting places responsibility, as so often happens in Scandinavian crime fiction, on people who fail to care for the vulnerable and on indifferent social instutions that don’t live up to their responsibilities. As well as the actions of a certifiable pyschopath or two.