The Ravens is the conclusion of Vidar Sundstøl’s Minnesota Trilogy, following Land of Dreams and Only the Dead. Unlike many mystery series, these books really must be read together and in order, because they all concern the same crimes which are only resolved in this final volume. And for that reason, I need to include here a . . .

It’s not really possible to discuss this book without inadvertently revealing some of the surprises in the previous two.

Just so you know.

Okay, then. In The Ravens, “forest cop” Lance Hansen continues his obsessive quest to find out whether his brother Andy is responsible for the murder of a Norwegian tourist who was camping on the shore of Lake Superior. As a forest ranger, Lance has no responsibility for investigating this crime, rumored to be the first murder in Cook County, a wooded tract of land in the northeastern tip of the state, framed by Lake Superior, the Boundary Waters, and the Canadian border. Lance’s only involvement is that he discovered the body, close to Baraga’s Cross, a local historical landmark marking the place where a Catholic missionary landed in a storm on his way to minister to an Ojibwe community stricken with an epidemic.

Because the crime occurred on federal land, it is handled by the local FBI office with the help of a Norwegian detective. An Ojibwe man whose fingerprints are on the bat used to bludgeon the Norwegian to death and who can’t or won’t provide an alibi has been arrested and is awaiting trial. Blood evidence also suggests that the killer was an Indian, not a white descendant of European immigrants. But Lance, a local historian who is more comfortable in the past than in the present, has uncovered a family secret. He and his brother have Ojibwe ancestry. He also finds a second murder victim – an Ojibwe medicine man who disappeared in 1892, just as Lance’s ancestor stumbled ashore after walking across the frozen lake, delirious and half-dead. As Lance thinks to himself “his family had spent a century perfecting the art of forgetting.” 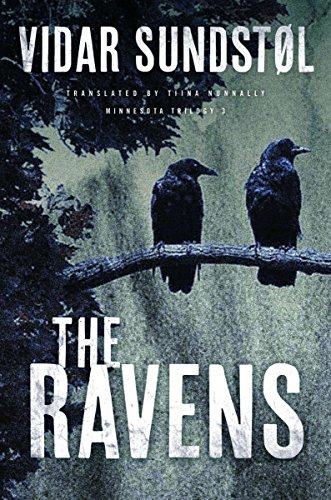 Because he saw his brother’s truck close to the scene of the crime, and because he knows Andy is probably gay (as were the Norwegian tourists) but ashamed of his sexual identity and has a history of committing extreme violence, Lance becomes convinced his brother may be a killer. In the second book of the trilogy, that suspicion makes a hunting expedition take a threatening turn as Lance and Andy stalk one another. Layered in this narrative is the story of their ancestor, a young Norwegian immigrant who has crossed the frozen lake and who is terrified by the Indian medicine man who is trying to help him. It’s an intense and disorienting book that leaves us hanging.

In The Ravens, the hunt resumes. Lance continues the family tradition of lying by hiding out in Canada for weeks, convincing his family he is vacationing in Norway. On his return to Minnesota, he continues to lie about his activities while gathering information, particularly from Andy’s daughter, who has been dabbling in drugs and feels oppressed by her father’s protectiveness, which has become physically abusive. Lance reconnects with a woman who he loved many years ago and wonders if it’s too late to love again. He also visits his mother in a Duluth nursing home, where she’s beginning to lose her grip on reality but still seems saner than anyone else in the family. Throughout this concluding volume, Lance is suffers from the same condition as Hamlet. He feels compelled to act, but is paralyzed by introspection.

Though in some ways this final volume has more elements of a mystery than the previous two volumes, it fuses stylistic elements of both: the deep psychological conflicts within a man who seeks the truth but feels the pressures of convention, a mixing of past and present in the figure of Swamper Caribou and what Lance has learned about his murder, moments of visionary hallucinations, and inchoate tension as two brothers circle each other, full of fury and twisted family loyalty.

Throughout the three books, the landscape plays a major role, particularly the vast frozen lake that’s always there, that seems to be without boundaries, a frozen world where figures hover in the distance and large shadows move beneath the ice.

image of the Grand Marais lighthouse in the fog courtesy of Sharon Mollerus.

All in all, I found this an intriguing, poetic, and really unusual crime fiction trilogy, well worth trying. The translation is by the always reliable Tiina Nunnally, who has done a great job. If you’re in Minneapolis tomorrow evening (April 21st) you can meet the author at Once Upon a Crime at 7 pm where I’ll have a chance to interview him. I hope to report back here.