I reviewed this book for Reviewing the Evidence in early 2014. I just got another advanced copy – apparently it is just coming out in paperback. So in its honor, here’s the review, reprinted with permission from RTE.The tl;dr version: gory and implausible but not without talent. Another RTE reviewer, Sharon Mensing, liked it better, so you may want to read her dissenting opinion.

First, the good news: Jørgen Brekke has created a couple of compelling lead characters, one a Norwegian detective in the far northern city of Trondheim who is recovering from brain tumor surgery and the other an American detective who has not recovered from a sexual assault she endured as a teenager. In addition to some well-drawn characters, Brekke can set up 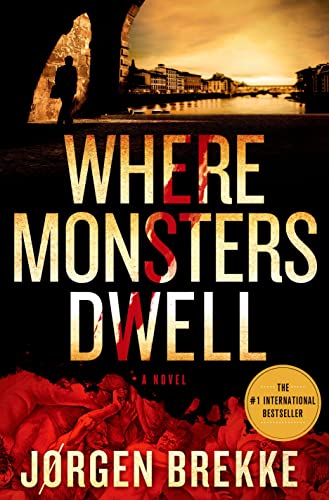 a scene so that you want to keep turning the pages. The translation reads well.

The bad news: pretty much everything else. The story is gruesome, implausible, over-long, some of the characters make little sense, and the plot doesn’t live up to its ambitions.

The story opens with a two-page prologue about a child hiding under his bed from the man who just killed his mother and is on his way upstairs to do the same to him. (We finally find out how that connects to the story much later, making this a prime example of why many readers hate prologues.) The narrative switches to a 16th-century monk making his way home to Norway after being abroad, shopping for some very sharp knives. Then we have a grisly murder at the Edgar Allan Poe museum in Virginia in and another one in a Trondheim library. Both crimes appear to involve rare books made out of human skin – and humans whose skin is being harvested by their killer for purposes unknown but most likely quite mad. We follow all three storylines, with the present-day stories connecting long before the historical one does.

Parts of the story are fairly well done, but the parts that are original and accomplished are overwhelmed in the end by Hollywood-style villainy that makes it seem as if it’s a mixed-medium artwork: an oil painting begun and finished with crayon. Though the English title is completely different from its Norwegian original (Nådens omkrets means something along the lines of “the circumference of mercy”), it is perhaps a more fitting title. WHERE MONSTERS DWELL was also the title of a 1970s Marvel comic.

Those who enjoy a thriller and aren’t bothered by gore or non sequeturs may enjoy this story. The rest of us can wish the author, who shows promise, better luck next time.