The first novel in a five-volume police procedural series, Unrest, was published originally in 2012 to acclaim in Denmark. Now available in English, it’s an atmospheric mystery that combines a complex homicide investigation with the vivid backdrop of a major riot in the multi-ethnic Nørrebro district. 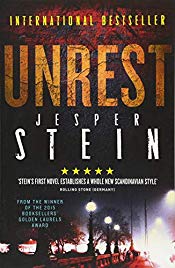 Axel Steen is called in to begin investigating a homicide in his own neighborhood. A body has been found in a tranquil cemetery on a night when there’s another pitched battle between police and autonomists (a Marxist-flavored form of anarchism). A squat in Nørrebro, the Youth House, had become a center of political resistance. When the police shut it down, it has caused nights of rioting. (The novel is set in 2007 and while the murder is fictional, the vivid setting draws on real events.)

At first glance, it seems the murder may be the result of police violence. The dead man is wearing an autonomist’s balaclava and shows signs of being beaten badly. Two police officers who had been dispatched to guard the cemetery are being suspiciously evasive about a crime that must have occurred right under their noses. But the victim is older than most of the anti-capitalist youth activists and he has a double-headed eagle tattoo – the symbol of Albania. From the cemetery, Axel spots a camera on a balcony that may have filmed the murder, but before he can recover it, someone has spirited it away. That’s the start of a complex story that involves deported immigrants, a drug gang, a left-wing journalist with an ax to grind, Danish security services, and civil unrest.

In some ways, Axel Steen is a familiar figure. He’s addicted to work, has an independent streak that puts him in conflict with his bosses, and has a completely dysfunctional home life. His divorce has been bitter, though he still carries a torch for his ex that tends to erupt into flaming arguments. He adores his five-year-old daughter but has trouble making time for her, taking her with him to the morgue because he can’t organize child care or let go of a work commitment. He has a heart condition that worries him, but he neglects his health. His most original characteristic is the contradictory position he occupies in Copenhagen.

The setting is wonderfully rendered. Nørrebro is a vivid mix of counter-cultural bohemianism and 21st century Europe, being the most ethnically diverse part of Copenhagen as well as the site of a historic cemetery where Danish luminaries, including Søren Kirkegaard, Hans Christen Anderson, and Niels Bohr, are buried. A journalist tells Steen with amusement that he is the only cop who lives there, yet he seems to feel at home in a place where the walls are tagged with “fuck the police.” He’s a cop’s cop in some ways – he still bears a grudge about a 1993 riot in the same neighborhood when he was a young officer – but when fellow officers disparage the residents he defends them, despising their bigotry. He’s a fitting representation of contemporary Denmark, a febrile mix of contradictions. He’s also willing to go the distance to solve a crime, even if it turns out truth and love and incompatible. Our last glimpse of our protagonist is a bit noir, a bit touching, and gives something of the flavor of the book:

He came out onto Frederikssundsvej and cycled under the overhead
railway line into Nørrebrogade, along with a procession of shiny cars with white wedding pennants and a newlywed couple in the front of an open sports car. The bride’s teeth were shining in the night in competition with her jewellery. Young men were hanging out of the car windows, singing and waving big red and white flags with the green Lebanese cedar in the middle, horns were honking and the drivers swerving from side to side across two lanes. Axel got off his bike at the church opposite his flat and stood watching the wedding procession until the sound of the horns and shouts could no longer be heard, the flashing brake lights disappeared, the cars disappeared, and only the night remained.

Jesper Stein is a journalist, critic, and novelist. The next book in the five-book series is titled Blackbird. The television rights have been acquired by the producers of The Bridge.

One thought on “Review of Unrest by Jesper Stein”