Later this month, the Univesity of Minnesota press will release the first volume in the Minnesota Trilogy by Vidar Sundstøl, a Norwegian author who spent two years living on the North Shore of Lake Superior. The Land of Dreams will be followed by Only the Dead (2014) and The Raven (2015). After reading the first, I’m impatient to read the rest.

As the novel opens, Lance Hansen, a forest ranger who patrols the national forest that occupies so much of Cook County, a vast wedge of land stretching between the lake and the Canadian border, is on his way to speak with campers who have illegally pitched a tent near the lake not far from Baraga’s Cross. This is the kind of work he does – enforcing rules, preventing people from dumping garbage on public land, organizing search parties when vacationers got lost, occasionally encountering illegal logging or hidden meth labs. Nothing too dramatic. But this morning will be different.

He parked his service vehicle at the end of the road and got out. It was 7:28. In front of him stretched Lake Superior. There was nothing to see but light and water and sky – no opposite shore on which to fix his eyes, just the illusory meeting of sky and the surface of the water far off in the distance. 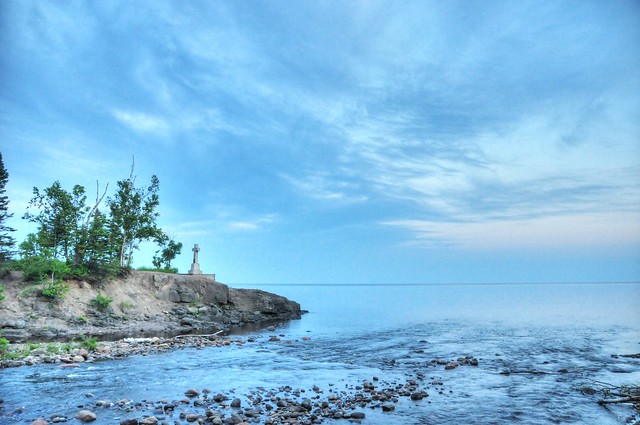 As he heads down the path toward the granite marker that marks the spot where a European missonary once erected a wooden cross after surviving a stormy crossing in 1846, he finds a shoe and a handprint marking where someone fell. Then, as he gets closer to the cross, he sees a bare leg sticking out. A naked man is sitting against the cross, covered in blood and muttering something inaudible. The intonation seems familiar and Hansen realizes he’s speaking Norwegian. Only one word is audible: kjærlighet. Love.

Hansen finds another man not far away, bludgeoned to death. Soon the county’s sheriff arrives. Homicide isn’t a crime they’ve handled much. In fact, there hadn’t been a murder in Cook County in the 25 years he’s been its sheriff. Because the crime occured on federal land, an FBI agent is summoned fom the St. Paul field office, and he is soon joined by a Norwegian detective. Hansen’s involvement in the investigation is over – though there is one thing he’s holding back. He’d seen a familiar truck near the cross, one belonging to his brother Andy, who he understand less than his immigrant ancestors, whose history is stored in binders on floor-to-ceiling shelves in Hansen’s home office.

As the unofficial county historian, Hansen feels more comfortable in the past, and as the FBI agent and his Norwegian colleague try to discover whether a tourist killed his companion or whether someone else was responsible, Hansen becomes fascinated by old news accounts of a body found near the same place in 1892, It could have been the body of an Ojibwe medicine man named Swamper Caribou who’d gone missing earlier, a disappearance that may be connected to an old family story about a fifteen-year-old boy crossing the lake on a winter night – and possibly to Hansen’s dream of walking under the frozen surface of Lake Superior.

The Land of Dreams, beautifully translated by Tiinna Nunnally, is an evocative novel that draws together past and present, the lives of immigrants and the indigenous inhabitants of the North Shore, American dreams and suppressed violence hidden behind calm exteriors and polite silences. In some ways this sounds like Karin Fossum’s explorations of the squirmy things living under the rocks of peaceful small towns in Norway, but in tone and style it’s far closer to Johan Theorin’s Öland quartet, which combines an atmospheric natural setting with psychologically probing portraits and a very light touch of the supernatural.

I’m not surprised that it was awarded the Riverton Prize. It’s a very good book.  I admit that I particularly enjoyed a setting that is familiar to me – just a few weeks ago we traveled to the places where the story is set. Even if you haven’t been to the North Shore, this book will provide you with an interesting journey. The only problem is that you’ll want to return as soon as possible, as there is obviously more to the story.

If you are in the Twin Cities, be sure to stop by Once Upon a Crime, where the author will be speaking on October 17th at 7pm. If you can’t make it, Pat and Gary will save you a signed copy. If you can go, be prepared to leave with a lighter wallet and a heavier bookshelf. It’s a great store full of temptation. But you know you need more books.