The second novel in the Harry Hole series has just come out in the United States. The series began with foreign settings, with The Bat taking Harry to Australia and Cockroches taking place in Thailand. 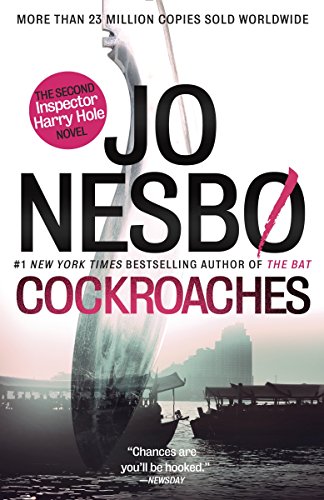 The Norwegian ambassador has been found dead in a seedy hotel where prostitutes meet johns for business. Harry is sent to provide assistance, investigating the case with a brash, Amazonian inspector who is bald and nearly as tall as he is. They both realize soon enough that, as scandalous as the circumstances are, it’s not nearly as grimy as the reality that is being covered up.

“He saw something move in the gloom, on the sink, a couple of antennae swinging to and fro. A cockroach. It was the size of a thumb and had an orange stripe on its back. He had never seen one like this before, but that was perhaps not so peculiar – he had read that there were more than three thousand different types of cockroach. He had also read that they hide when they hear the vibrations of someonoe approaching and that for every cockroach you can see there are at least ten hiding. That meant they were everywhere.”

The corruption Harry senses hiding behind the surface is not just in Thailand, but also at home in Norway, where nothing is quite as it seems.

I enjoyed reading this book quite a bit more than I’ve enjoyed recent entries in the series. Harry (though he is struggling to stay sober) seems more light-hearted, less heroic, more spontaneous in his approach to investigations. The plot twists and turns, but without the elaborate mechanics of later entries in the series and I never felt manipulated. Thailand is wonderfully evoked, and the characters pop off the page. It’s also not quite the doorstop later books have become. All in all, I’m happy to have read this early entry in the series and am happy to get reacquainted with the entertaining detective whose company I enjoyed so much.

3 thoughts on “A Short Note About Jo Nesbø’s Cockroaches”